This week saw the sixth meeting of the EU stakeholder dialogue on the implementation of Article 17 of the new copyright directive. This meeting was the first one where the question of how to reconcile the protection of user rights’ with automated filters based on technology that cannot assess the legality of the use of copyrighted works was explicitly on the agenda. From the perspective of the users’ organisations participating in the stakeholder dialogue this is the main question that the stakeholder dialogue (and the guidelines that the Commission will have to issue afterwards) needs to address.

Unfortunately, Monday’s meeting did not result in a productive discussion about how to protect users’ rights. Proposals made by COMMUNIA and Studio71 on how to strike a balance between the rights of users and the interests of creators and other rightholders were largely ignored by a coalition of major rightholders from both the music and the audio-visual sectors. Working in concert, the representatives of the Hollywood studios (MPA), film producers (FIAFP), commercial television channels (ACT), major record labels (IFPI) and music publishers (ICMP) disputed the fact that there is a tension between protecting users rights and automated blocking, restated their conviction that Article 17 is only about empowering them versus the platforms, and suggested that users should simply trust that rightholders will not block free speech or other legitimate uses. In doing so they have made it clear that they want their interests to prevail at all cost, that users should not be trusted and that for them user rights are something that should exist at their discretion.

This outcome leaves the European Commission in the difficult position to make sense of the input gathered throughout the previous six meetings and to outline a way forwards. Fortunately it seemed that the Commission is not willing to succumb to the unconstructive behaviour exhibited by rightholders and will take serious its task of finding a balance between users rights and the interests of different types of rightholders.

A proposals for protecting users’ rights

So how could such a balance look like and what is at stake? One of the key insights that emerged from the previous rounds of the stakeholder dialogue is that even the most advanced content recognition technology is incapable of understanding the context in which works are used. This means that technology alone cannot make the determination if a use is lawful or not. Article 17 requires platforms to take measures to prevent the availability of content that rightholders want to keep off the sharing platforms and, at the same time, to ensure that legitimate uses (such as quotations or parodies) are not affected. This means that no matter how good it is at recognising content, ACR alone cannot meet the requirements of the directive. 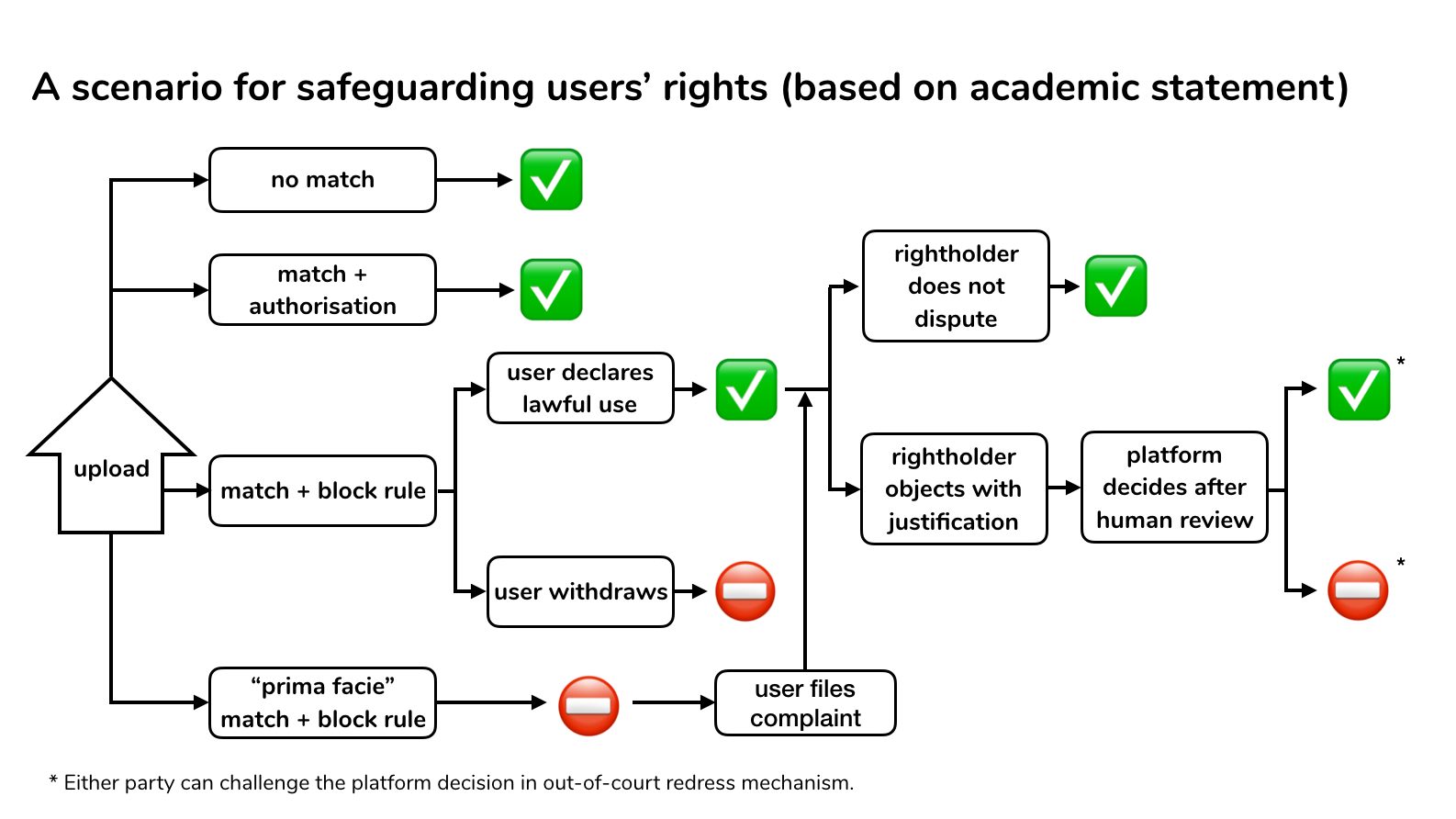 The proposal that we presented at the beginning of the meeting (which is largely based on a statement issued by more than 50 copyright academics that was published last November) takes this into account. It acknowledges that there are some cases (such as sharing of full copies of movies or songs without any modifications or additional context) where the likelihood that a use of a work is legitimate is so small that is reasonable to employ automated blocking to protect in a timely manner the interests of rightholders. If filters recognise such “prima facie” infringing uses of works in user uploads, it is acceptable that the uploads are automatically blocked as long as uploaders have the ability to contest the blocking decision afterwards.

It also acknowledges that there are cases (such as uses of works that have been modified or uses of works in combination with other material) where the decision to block or not to block cannot be left to automated filters. In these cases our proposal suggests that users should be informed about the fact that their upload contains protected works owned by others and they should be given the possibility to declare that the use is legitimate (for example, because it is covered by an exception or because the user has obtained permission or because the ownership claim made by the rightholder is simply wrong). If the user does not make the declaration, the upload is blocked. If the user makes such a declaration, the upload cannot be blocked and the rightholder is informed about the upload. If the rightholder does not contest the user declaration, the content stays up. If the rightholder contests the declaration of the user, the platform is required to decide if the content stays up or if it should be taken down (this is a simplified summary for a more detailed explanation see our presentation starting at 10:26:30 in the video recording of the meeting).

We believe that this proposal sets out a path to reconcile the shortcomings of filters with the fact that some reliance on automated content recognition is needed to deal with the amounts of content that is shared via online platforms. It is based on the idea that, when it comes to fundamental rights such as freedom of expression, the users are the ones who must be in control, instead of automated filters (indirectly controlled by rightholders) that are incapable of making the difficult assessment if the contents of an upload are covered by an exception or not.

Interestingly, we were not the only ones suggesting this approach. After our presentation the German social media production company Studio 71 made a very similar proposal (also based on the academic statement). The Studio 71 proposal adds an additional safeguard for rightholders, which would allow them to immediately take down obviously infringing uploads. It maintains the same basic idea that users must be allowed to override filters and prevent them from automatically blocking their uploads if they believe that their use of third party works is lawful.

It is important to note that both proposals only deal with the automated blocking of uploads and leave the much more common scenario, where automated content recognition technology identifies third party works for monetisation by their rightholders, unchanged. In doing so they do not question the business models that have evolved around sharing platforms and preserve the ability of rightholders to monetize the uses of their works on sharing platforms.

While some rightholders such as collective management organisations seem willing to consider these proposals, a vocal coalition representing major commercial rightholders from the music and audio-visual sectors refused to engage with these proposals. From their perspective user rights safeguards, other than the ability to complain once content has been removed, are both unnecessary (because users can trust rightholders to do the right thing) and against copyright laws in general and the directive in particular (at least according to their maximalist interpretation of copyright). Their opposition to our proposals went so far that they made the argument that the stakeholder dialogue must not result in any substantive guidelines and that the Commission was not entitled to provide any interpretative guidance on Article 17. As the Commission has repeatedly pointed out, this position clearly contradicts the explicit instructions contained in Article 17(10) that is the basis for the stakeholder dialogue.

With the major AV and music rightholders unwilling (or incapable, as their representatives in the stakeholder dialogue clearly lack the mandate to engage in a constructive manner) to contribute to finding a solution for the tensions inherent to Article 17, it is clear that the dialogue has hit a brick wall. The Commission – which has repeatedly made its dissatisfaction with the attitude of these rightholders clear – has announced that it will now “reflect on the input received and on a way forward”. In practical terms this means that there will be no further meetings of the stakeholder dialogue until the end of march when the Commission will “share initial views on the content of the guidelines”. These initial views should provide us with a first clue if the Commission has been listening to our proposals and concerns or if it will succumb to the bullying tactics of the major rightholders (who will undoubtedly attempt to assert additional political pressure during the next weeks).

A little bit of evidence

As part of its reflection the Commission will hopefully also look for additional evidence regarding the size and scope of the underlying problems. As we have pointed out before, so far the discussion in the stakeholder dialogue has been characterised by a near total absence of empirical data. While we have repeatedly asked the platforms to provide information on the prevalence of blocking, they have so far refused to make any meaningful data available to us (even though Article 17(10) requires that “users’ organisations shall have access to adequate information from online content-sharing service providers on the functioning of their practices”).

In this context, it is very welcome that a new report published by the French Ministry of Culture finally provides some insights into the scope of blocking happening on sharing platforms. Based on a survey conducted among a representative sample of French internet users above 15, the report shows that 33% of all French internet users have shared audio or video material from third parties on platforms. Of these 13% have had at least one upload blocked. 58% of those who have had an upload blocked have challenged the last blocking decision and 56% of these challenges have been successful and have led to the reinstatement of the uploaded content. In absolute numbers this means that more than 700.000 French internet users (1.4% of the total) have been at the receiving end of an unjustified blocking decision.

While this study is only applicable to France, it clearly shows that protecting user rights from over blocking is a very real concern that affects a significant number of internet users in the EU and that there is a very real need for meaningful safeguards for users’ rights.